“Years and memories run fast, and everything in around us changes even faster; we are told that the world turns, and like all turning things, by definition, at a certain point it gets to its starting point.
I remember our grandparents, those who were used to waste nothing, always looking for something which could have been result useful… to someone.
The networking between companies has become a very popular topic these days, listening it seems that nothing like that have not appeared before, the contemporary man, while seeking desperately for solutions, to avoid mistakes invents something that already exist.
We, as Apuana Coorporate put value on tradition, making alliances, either tighter or softer, between us, aware of the fact that every single “snatch” would cause damage to everyone”

AC-The widespread factory is an economical, ethical and social project, shaped as informal network of companies.

The structure of this network is based on the principle of “vertical dismantling” of the firm’s duties: immaterial assets first (strategic coordination, research and marketing) are handled by the lead-manager company; on the other hand there is the artisan know-how, related to knowledge of the matter and the productive structures and processes, is shared into a network of external corporations.

The reason why the network lies into the inner system of values of the companies member of the network, transmitted with transparency to the market, and which the market is supervisor itself.

APUANA CORPORATE is a community which works for the aware and critic consumer, made by local manufacturers and global customers, having as tenets the sharing of the aims and results, the transparency of the connections among its members; whom are in the majority: small sized artisan enterprises, designers, researcher and artist.

To all of them AC offers a double opportunity: to coordinate the single skills in order to turn each project into a finished product, and built together, through the brand, a stairway toward those markets until now perceived as remote and trouble.

AC is a network of human beings, that’s why it is not perfect, only the will, the sympathy and the mutual respect allows it to exist.

Please, have a look to our blog, you will find the user manual of our network-template, licensed ad CC-SA (Creative Commons Share Alike), and make your contribution sharing it by the adoption of its operational principles; if there will be premises, we will be glad to share with you a link through which you will become a member of our community of social innovator.

We do believe in a new world, we believe in an economy of the knowledge in which ethical values are suppose to be the standard not a rare exception, our mission is the social and economical development in the territory where we work at, make easier the cooperation among the various member of the network.

Our aim is to prove that other ways to do are possible, in order to get into that globalized market with its dynamics which made tremble every single thing we thought as given. We will make the impossible, to make our dream come through; we will be brave and we will make difficult choices, seeking alternative paths which will be able to to bring us into a better future; liberty will be our flag and independence, the reason of our lives.

WHAT WE WILL DO

The Apuana Corporate’s activities will be basically sorted out in two typologies:

In both cases, in the regard of the client and the partners the coordination activities will follow the standards in matter of transparency and ethic which make AC stands out of the group of the competitors.

The brand AC embodies the firm leader, which have duties on strategic coordination, research and marketing.
Taking advantage of an amount of patronages, awards, corporations and others activities with vast visibility, AC’s aim to spot each one of the firm of its productive network, because AC believes that putting value on the single means put value on the group as well.

In the last decade the finance’s activity had polluted everything: creativity, experience, insightfulness, everything to be outputted into the real world needs to be processed as numbers first, this for make sure that the thing can generate other numbers.
In our opinion research means risk, risk means hope and unknown is the only given thing for us.
Serendipity and action are our keywords.

By keep talking about it, trying to define it we ended up to forget what it really is: the market is made by ordinary people, we are the market.
The AC’s project cares about people first and business comes next… everything, once again, is about values.
Into a world which lives of complexity, we wish to be simple and transparent.

THE GUARANTEE OF MADE IN ITALY

In our system there are two documents designed to prove to our customers the authenticity of our products:

The real innovation is represented by the code SMPP, present in both documents and physically engraved on the product, attests origin and productive chain.

The mechanism called “Made for you”, applies the productive principles “Just in time” of Toyota’s philosophy, but with the difference of paying particular attention on the right managing of the non-recyclable natural resources rather than the optimization of the stock.

If you have just bought one of our products and you get to this page following the instructions of “Certificato di Autenticità Arigianale” attached to it, please contact our customer service to get a copy of the internal production order (kan ban tag), which will allow you to follow the entire production chain of your product. Then visit the profiles of the designer and artisans involved in the process.

The Kan Ban system in one of the most simple and intuitive production-checking tool implemented into a LEAN MANUFACTURING process, in the original system the product before move forward to the next department of the producing chain has to pass by a central station named “supermarket” where every single element of the product is checked and its relative document: the Kan Ban Tag is uploaded with the information about the operations left to the finishing.
Applying the rules of SMPP to the experimentation carried by the widespread factory “Apuana Corporate”, instead of passing by the checking station (supermarket) the product, according to the skills and machineries needed for its making process move from firm to firm and the sequential order of those laborers is supervised on-line through notifications reported into a facebook secret group (every single product has its dedicated facebook group). This device is very effective in order to keep the cost under control during the start-up phase, having anyway always the chance to move into a dedicated system when needed.

Now let’s see the kanban content into the SMPP 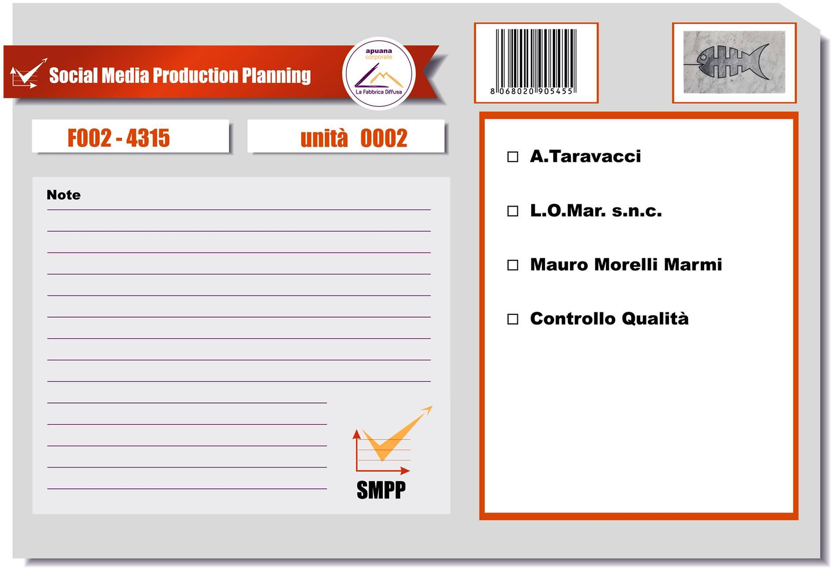